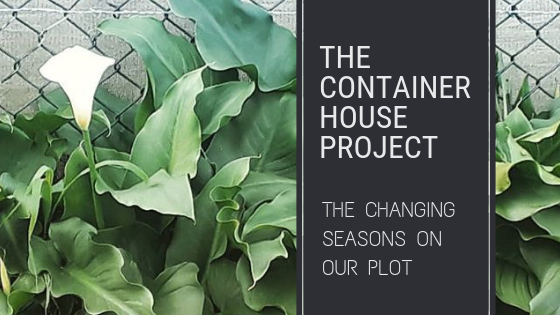 We’ve been living out in the countryside for six months now, and have had the privilege of enjoying several seasons already. The changes that come with the seasons have seemed much more real than it did when we lived in Cape Town. It has been a wonder-filled journey and I’ve been absolutely loving it! Here are some of the nature-filled experiences we got to enjoy.

We moved to our new property at the beginning of April, after a very hot and dry summer. Everything was dry, brown and dusty. The ground had baked as hard as bricks. We had a bit of an issue with flies. So, let’s skip straight to winter.

It wasn’t long before the first winter rains fell. With the relief of this much needed water, the ground exploded into life and we suddenly had plants growing everywhere. Not only that, but we started seeing creatures that had seemed absent over the previous long dry days.

Where exactly do toads hide over the summer months? This one was particularly friendly and happy to sit in my hand, as you can see.

We have a ditch that runs down the length of the property from the back fence to the gate where it meets up with the ditch that runs along the road. Just before we moved in, some roadworks had been completed in the area, including on our road. Therefore, the ditch on our property was now deeper than the main ditch, so we had rain water collecting at the front of our property, making a small dam.

We soon had tadpoles. It was very exciting. I was looking forward to watching them grow up and turn into toads; Kevin not-so-much as he awaited a plague of biblical proportions. Sadly, they didn’t make it as there was a week of unseasonably warm weather and the puddles dried up two days before we had more rain.

But there were other things to watch. Arum lilies began to spring up and we waited for the first flowers to bloom, with great-anticipation.

I am pretty sure that Arum Lilies are what gets those that live in the Western Cape through the cold and wet Cape winters. We love seeing them growing on verges, besides the highways, and almost everywhere that you look.

The ditch, while full of fresh water was quite picturesque. The dogs had a great time jumping from one bank to the other and hunting in the puddles for toads. However, as the winter rain began to dwindle, the water in the ditch grew stagnant and began to smell. We were left with evil green mud at the bottom which is now drying further and beginning to crack.

Kevin began looking for solutions to this problem. Our plot is in a bit of a dip in the land so the ditch is a necessity. Without it, all the rain water from the surrounding plots would sit in our yard with nowhere to go. However, as it is now, it’s a bit of a health hazard and a breeding ground for mosquitoes and other similar insects.

After much deliberation, Kevin finally has a solution. We are going to lay large diameter water pipe and fill over the top. We will include gullies so that the water can flow into the pipe and be directed down to the main municipal ditch. To do that we need to hire a TLB. There is a lot of grading work to be done, before we can pour concrete, as the ground is uneven, so we’ll do all of this at the same time. Further details on a future post. Watch this space…

Before we knew it, the days began to lengthen and the temperatures began to rise. Spring had arrived, and with it all plants began producing flowers. We cut a lot of the undergrowth down with the brush cutter, but we didn’t cut all of it. We mostly just cut the plants where we need to drive and park the cars and where we need to walk around to get to the wash-line, etc.

I am so glad we didn’t! The spring flowers are beautiful!

Little spots of colour started appearing between all the green. Delicate little white flowers, like the one on the left and tall red ones waving in the wind greet us every time we walk outside. Beauty surrounds us!

We also have the yellow daisy-type flowers that are a common spectacle in the Western Cape at this time of year. The dogs, of course, are loving running around in the flowers. I think they are also enjoying the warmer weather.

Changing Seasons – Other Things we Noticed

It’s not only on our property that we noticed these changes. Even on our drive in and out of Cape Town has brought us different vistas as the weeks progress.

In the middle of winter, everything was a bright, emerald green and the abundance of green was almost overwhelming. We’ve watched the crops grow and turn yellow. The fields are currently a much less intense green, now spotted with purple, red and yellow flowers.

We have seen fields after the harvest and the resultant bales of hay drying out in the sun. We have watched the goats and the sheep grow rounder and rounder before giving birth. Then almost overnight, there were lambs and kids dotted around the fields, playing and head-butting each other. We arrived home one evening to find that the flock of sheep that often graze in the field opposite our house had been shorn.

And so the cycle of life continues, in time with the ever-changing seasons.

35 thoughts on “The Changing Seasons on our Plot”