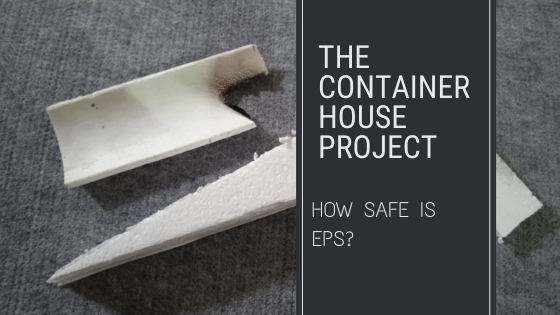 A few weeks ago, we posted our most controversial article yet! We were surprised at how many people thought that our decision to use expanded polystyrene (aka EPS) boards for our ceilings was a bad idea – especially our US readers on Reddit. (Thanks for the concern!) It brought up some questions; mainly, how safe is EPS?

From the comments received on Reddit, I believe it’s illegal to use EPS in home construction in the United States of America. If you live in a country where it is illegal to use EPS, then we suggest you obey the regulations in your area and to not use it.

In South Africa, we have many other socio-economic issues to consider. Anything that can provide the local people a reasonably safe and affordable building material is welcomed with open arms. Generally, suburban residential areas in South Africa have houses built from bricks. Many people, however, are in low income areas of South Africa. According to the internet, 14% of the population live in informal settlements (that’s over 8 million people!). Home owners in these areas build their homes using whatever materials they have found. Adequate housing in South Africa is a huge (and unfair) issue, and my guess is this why our regulations might be a little more lenient than those in other, more developed countries.

How Safe is EPS? The Controversy

Surprisingly, the readers’ reasons as to why we shouldn’t use EPS ranged from one end of the spectrum to the other. Some of our readers were worried that the polystyrene boards would absorb water and grow mould. Others believe it to be a huge fire hazard. (These two issues would cancel each other out; as if they were to absorb a lot of water they wouldn’t catch fire, and if they combust that easily, we wouldn’t have to worry about too much moisture). Are either of these an issue? How safe is EPS?

I must admit, I’ve spent several weeks trying to understand the concerns about moisture absorbtion in our polystyrene ceiling boards. I know in some countries people worry about “black mould”. Possibly, this is the source of the concern. We live in Africa, where the summers are hot and everything dries out. Even in winter with our Mediterranean climate in the Western Cape, we have sunshiney days where everything can dry. We don’t rely on central heating and usually our windows are open, whatever the weather. I do not know of anyone who has ever had a problem with black mould. It’s not something that ever comes in up in conversation.

Even if it were an issue where we live, EPS is mould-resistant. EPS has no nutritional value, so nothing will grow on it. If we do see mould on the ceiling, we can be assured that its growing on dirt, and not on the EPS. We don’t throw our half-cooked spaghetti against our ceilings (does anyone?); we’re not expecting any problems.

When I was growing up, we used polystyrene kick-boards during our primary school swimming lessons. A moisture-absorbant material would not make a good floatation device.

To be honest, our readers’ concerns on the danger of fire is something I could totally understand. The idea of being trapped in a burning building has scared me since childhood. We have taken every reasonable precaution we can against fire while building our container house. We have also ensured that there are multiple exits from each section, should a fire break out.

In fact, to my African eyes, the idea of living in a wooden house with piped-in gas, is the one that seems dangerous! I am sure that these houses have many safety features I am totally unaware of. In South Africa, no one has a smoke alarm in their house. I wouldn’t even know off-hand where to buy one if I wanted one.

If we can understand the fire concerns, why were we not worried about using polystyrene as our ceiling boards?

Local South African manufacturers sell many EPS products specifically to be used in the home and office. There are several brands of ceiling board that have moulded expanded polystyrene to make them more appealing to the home and office owner. Also, the majority of local cornice is EPS. It’s cheap, and lightweight (and therefore easy to install).

I found an extremely interesting pdf article on the internet regarding the use of EPS products in Europe and its behaviour with fire. According to this article EPS can be used in European buildings, but the authorities prefer it to be covered by another material (eg concrete). However, they did bring out some very interesting thoughts:

We actually already had proof of this last point. You may recall our article on cleaning out two of the containers we received for this project. The previous owners had turned them into office spaces (or something) and sometime before we received them, vandals had set them alight. When we received the two containers, no one had cleaned them out and they were still full of soot, charcoal, and the remants of anything that had been in the interior before the fires. The fitters had used EPS as insulation. We had to remove many pieces of broken sheets of polystyrene. They were covered in soot, but much of it seemed untouched by the flames.

But we did our own burn tests anyway.

Our goal was to see what happened if we subjected the EPS to a direct flame. We also wanted to see if there was any difference between the EPS specifically sold as ceiling boards and cornice, and the standard 40mm sheets we used for our ceilings.

You’ll see in the video above, that we subjected each of our samples to a few seconds of flame. On removal of the flame, you’ll note that the EPS self-extinguished almost immediately. In fact, the piece that took the longest to self-extinguish was the piece specifically sold as a ceiling board for offices – was this possibly because it was covered in a thin film of plastic to make it “prettier”?

How Safe is EPS? Our Conclusion

In conclusion we believe there are more dangerous materials we could use for our ceilings (knotty pine being one of them). It would be unpleasant to stand under a polystyrene ceiling in the case of fire. However, if our ceilings catch fire, we can almost gaurantee that our carpets, curtains and other soft furnishings will also be burning.

Hopefully we would have already made our escape.