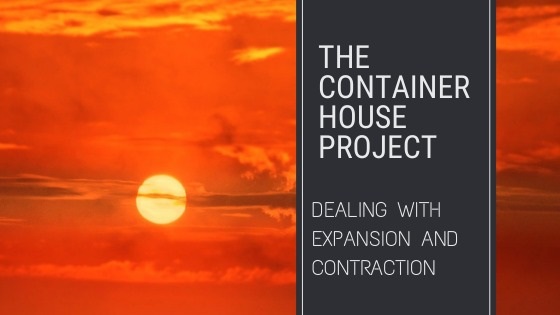 Expansion and contraction as things heat up and cool down, is something that every child learns at school. It’s one of those things that I mostly believed about because it was taught in school, but nothing I really thought would make much of an impact in my life. Well, I was wrong!

So, here we are, living in house made out of giant metal boxes. Expansion and contraction is a thing that we have visibly seen as the weather changes through the seasons and even day by day. Kevin knew it would be a problem, and we would have to run many experiments to see what survived this phenomenon the best, especially in regards to the joints in the interior cladding boards.

Problems that Expansion and Contraction Have Caused Us

Here are some things that have caused us problems:

We’re not too worried about the cracks showing through, as we knew this house is a bit of an experiment. It was always likely that we would have to redo a few things, or try something else a few years in the future when it becomes time for maintenance. However, we have learnt a thing or two:

Things We Have Learnt

We’d love to hear how you deal with expansion and contraction if this has ever been an issue in one of your projects.

4 thoughts on “Dealing with Expansion And Contraction”