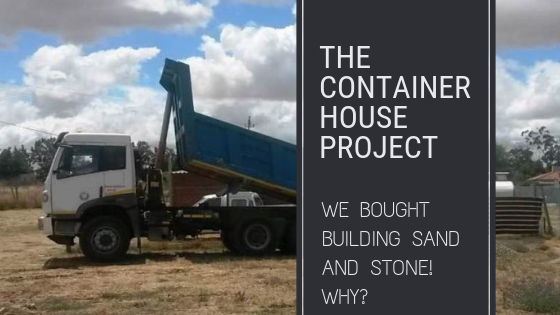 It seems a bit crazy to buy lots of building sand and stones for our shipping container house when we have tonnes of the stuff right under our feet. There is a reason why we have done so, and this post explains what we bought and why we bought it. Building a home is kind of like baking a cake; you use different ingredients for different purposes, depending on how you want the end product to turn out.

Our little bit of property is mostly made up of a clay type of soil. Clay is interesting but difficult to work with. It expands with water and contracts as it dries out. Because of this, you cannot cast concrete directly on top of clay. It would crack as the clay “breathes”. Our house is made up of four shipping containers placed in a square. The central “courtyard” area will have a concrete floor. So, how are we going to prevent the concrete from cracking under us?

I asked Kevin what types of sand and stone are available for purchase in the building industry.

Types of Building Sand and Stone

Plastering Sand: Kevin described this kind of sand as “dead” because it doesn’t react much and holds its form well. It is mainly used for plastering walls because it sticks well to a wall and doesn’t slide down before it has a chance to dry.

Building Sand: This kind of sand is much  more “alive” and settles more than the plastering sand. Therefore, this sand is best for between bricks as it settles nicely between the rough surfaces. If used for plastering, it would tend to slide down the wall. I can imagine that that would be extremely frustrating!

Fun Fact:
Most building sand comes from old river beds and other sandy areas. Sea-sand is usually not used for several reasons. 1) The particles are too rounded in shape so the concrete won’t bind properly. 2) Sea sand doesn’t have a lot of compressive strength so the end result won’t be as strong. 3) The salt found in sea sand attracts moisture which can cause the structure to be damp. 4) The salt and water combination will encourage metal components to corrode faster.

Building Stone: This crushed stone is available in a variety of different average stone sizes to be used in various applications.

Slag Ash Aggregrate: Slag ash aggregate is a byproduct of the metal industry’s smelting process. After smelting ore, the slag that runs off is cooled, crushed and sold as a filler for concrete. It’s not as strong as stone but is a little lighter so is very useful in areas where strength is not a concern. Kevin hasn’t seen slag ash available for sale in the Western Cape (although it might be). It is readily available around Johannesburg which is a mining area. It is also usually a little cheaper than stone, and considered a sustainable alternative to aggregates such as stone.

Base-course and Sub-base Material: This material is available in a range of coarseness from G1 through to G7. It is highly compactable which makes it very useful for places such as under the tar on roads and highways.  It’s made from a mixture of stones and other substances in order to make it compact extremely well.

We decided to place our order for ten cubic metres of building sand, fourteen tonnes of G5 and 28 tonnes of G7. The idea is to make a nice compacted layer of G5 and G7, over which we will place a layer of sand. Over this we will cast our concrete floor. All the layers should allow the clay to slide around underneath as it wants, leaving our concrete safe above it. The G7 is a little finer than the G5.

We were a little worried about huge articulated dump trucks managing to get through our driveway from the road as there are ditches running on both sides. We were also a little worried about the power cables that run across our property. After a few days of back-and-forth emails about the delivery of our order, I spoke to a manager regarding our plot and he sent a site inspector to have a quick look. The verdict: We would be able to accept delivery in a smaller short-wheel base dump truck.

So, we paid for the sand and stone on the Thursday and made arrangements for delivery the following Monday.

I can’t doubt this particular company’s efficiency. I received a phone call very early on Friday morning; they were ready to make the first delivery. Thankfully Gwen and Louis were on site and in a position to accept delivery, so we had everything delivered by early afternoon that day.

Now we are ready for site leveling and the layering of our base-course and sand!

26 thoughts on “We Bought Building Sand and Stone. Why?”

How Much Stuff Do We Need?

DIY Aquaponics; To Do or Not To Do

How to Find Space in a Container Home