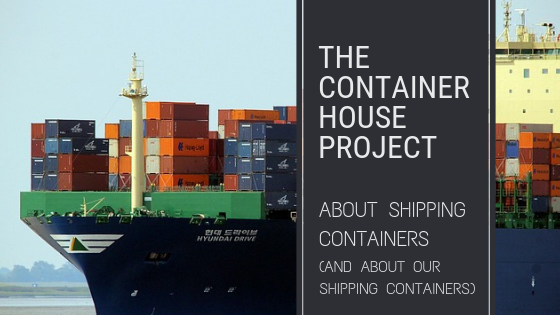 Malcolm McLean, an American trucking magnate, designed the first shipping container as we know them, in the 1950s. (There were similar concepts around in the previous decade or two). He saw the need for an interlocking and stackable storage unit for freight, because loading and offloading trucks, trains and ships was taking too long. Malcolm changed the world.

Our house is constructed from 12m containers, two of which are high cubes.

You can read more about the history of shipping containers on Wikipedia.

About Shipping Containers and Their Identification

I set about on an internet expedition to see what I could learn. There are databases available where one can track the full history of a shipping container. However, this costs money; money that would be better spent on building our house.

So what did I find out?

About Shipping Containers on the Container House Project

The shipping containers we purchased have been graded as to their condition. We can’t quite figure out if the grading system is universal, or particular to the companies that deal with shipping containers. However, if it is company particular, the grading is very similar between them. A Grade A container would be in brand new condition. Grade B would have few dents and maybe a spot of rust. Grade C you might expect a patch or two along with the dents and a bit more rust. And so on.

For this project, we looked for the containers in the worst condition. We were looking at upcycling old containers and using as little water as possible to build our house for a somewhat more eco-friendly approach to housing. Our purchases did depend on what was available at the time and what bargains we found.

Let me introduce you to our shipping containers.

This container is a 12m high cube. It has been used as a building of some sort previously. It has doors and windows already cut into it. You can also see where a toilet was once fitted to the interior. At some stage, squatters lit fires on the wooden floor (yes, seriously!). There are burn marks everywhere and holes in the wood.

The fires have warped some of the steel making it particularly disconcerting walking on the top. The steel deflects with a loud “boing” as you walk over it, and then pops back once you lift your foot.

This container has had a similar history to the above container. This one is of a standard height. The fires have bubbled and loosened some of the paint on the sides, but it is still stable to walk on. There is, at the time of writing, some lichen growing on the top! We received both the South and East containers full of rubble and other rubbish left from the fires and previous inhabitants.

This container is also in very bad condition. A large area on the “roof” has rusted, leaving the metal looking a bit like a colander. The result of this is that rain water has damaged the wooden floor inside and rotted some of it. You can still walk across the top of it, as long as you avoid the very rusty section.

This container is probably in the best condition out of all of them. it has a bit of rust, but is still wind and water tight and therefore sea-worthy. This is our second high cube container and the very last one that we purchased.

This container came with a free pair of socks. They are filled with something. We don’t know what, but guess it is probably some kind of insect repellent.

This container is also in fairly good condition, and sea-worthy. The paint has faded and there is a bit of rust. Kevin has cut a door into the side so that we could access it. He found it a bit difficult to do so because he knew that with every rotation of the cutting disk, he devalued it.

We bought this container through a private sale and the collection point was not too far from where we stay. Bonus!

Those are our shipping containers. We look forward to seeing what the future holds for these awesome steel boxes!

9 thoughts on “About Shipping Containers”