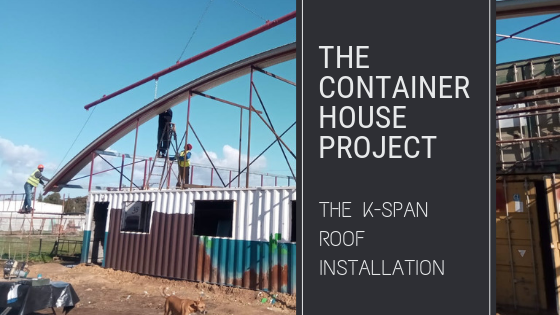 The day that the K-Span roofing machine arrived on site was a day of great excitement for everyone involved. This marked the start of our K-Span roof installation; a prototype and the first of its type in South Africa. We were all looking forward to seeing the planning that had taken place come to fruition and to see our technical drawings come to life.

We were expecting glitches, of course. You can’t expect a first-of-its-type kind of project to run perfectly smoothly. The glitches, however, were a little bigger than hoped for.

The K-Span machine itself is amazing! It’s quite big – about the size of a small truck – yet small enough to take to site. It has a built-in generator in order to run the machinery. A two tonne roll of steel sits on a spindle on one side and feeds into one side of the machine. The machine then bends the sides down while it pulls it through. When it is at the correct length, it cuts it. The U-shaped steel channel is then fed back into the machine where the machine crimps it to the desired radius. Within a few minutes, a complete roof arc emerges, ready for installation.

The roofing teams made a couple of shorter test pieces to check that they had the radius one hundred percent correct. When they were satisfied that everything was set up correctly, they were ready for action.

Before long, we had a yard full of roof arcs awaiting installation. As I mentioned before, this roofing system is a first for South Africa. A much smaller test project had been completed, but our roof is the first real project – very exciting! But, it does mean that our project was also a learning curve for everyone involved. Black Block Industries has experience in the construction industry, and with standard roof installations, but this roof installation project was new for them too. There’s nothing quite like a new challenge to keep you on your toes!

The most difficult part of the installation was lifting each arc into place. The original plan was to pull the arcs up using human muscle and ropes. However, it was soon apparent that the length of the arcs was making them too unruly for this option. The strength with this type of roof happens when the arcs are seamed together. Because the arcs are so long, un-seamed they are a bit floppy.

The two teams seamed together two arcs and tried again. It was better, but still not stable enough to easily install. There was no choice but to hire a crane.

A crane was soon arranged. Believe it or not, we only needed a baby crane. This “small” crane could sit in the middle of the yard and reach from one side of the plot, where the arcs were sitting, seamed in twos, and stretch over to the far end of the house.

The worker bees attached a clamp to a pair of arcs, after which the crane lifted it up. It then carried the arcs carefully over the power lines, over our neighbour’s yard, and into position over the container house. I stood by the gate, out of the way of the crane, and watched the arcs whooshing over my head. It was such an amazing opportunity for me to be able to watch the work at such close quarters.

The crane then held the arcs in place while they were seamed to the previous sets. Once the seaming was complete, the clamps were released and the crane returned to its original position to collect the next set.

Before long, all the arcs were in place and we had a roof!

The Biggest Glitch of The K-Span Roof Installation

Unfortunately though, the installation team didn’t realize until too late, that the weight of the arcs was slowly pulling the roof down, with the addition of each arc. The arcs were then bolted into place on the supporting structure incorrectly. Therefore the west side is currently lower than the east side. We all feel that the dip in the roof doesn’t showcase the full potential of the grandeur of the roof design.

So, we are going to fix it.

Black Block Industries unfortunately also voiced concerns regarding the structural stability of the design as they were not expecting it to dip the way it did. Most roof installations of this type have a more pronounced radius. However, we had limitations in regard to the height of the building as per the regulations as set out by Swartland Municipality. Therefore, for this installation, the machine and roof arcs were pushed to their limits.

John Moll, our structural engineer (GM Civil Engineers) did let us know that the arc radius is enough for the roof to hold itself up. However, as an insurance policy, he has asked us to put in another beam. We would like everyone who has worked on this project to sleep easily at night, so we will be doing this when we correct the dip in the roof. I also believe that the structural engineer is more concerned about the integrity of the roof in forty years time if it is neglected, than he is about it right now.

Our roof will no longer be a fully beamless roof system, which is a little disappointing. However, Kevin, working with John Moll, has figured out a way to work around this and will be putting in a lattice type beam. It will be as strong as an I-beam but a lot lighter. This design will also let us keep the airy feel to the central area of our house.

It might also be a good thing because the beam will allow us to keep a close watch on the roof as the years pass. Any changes in how the arcs sit on the beam, might forewarn of us any repairs that need to be made, before they become a big and expensive issue.

6 thoughts on “The K-Span Roof Installation”

How to Grout Tiles