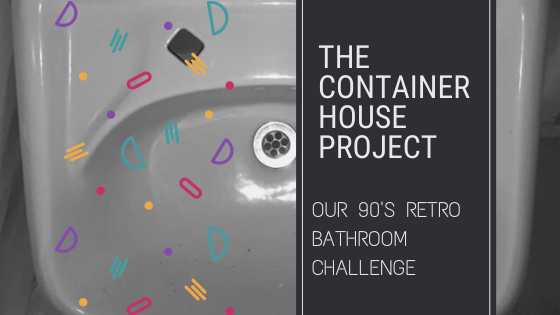 Good news: We have a brand new, good quality, Cobra bath mixer. Bad news: It is probably from around the 1990s and very dated. I think we have just set ourselves up for a new challenge: A 90’s Retro Bathroom Challenge!

Despite being quite old-fashioned, Kevin is really excited about the Cobra mixer. He tells me that Cobra taps from “back then” were of excellent quality. They are made from plated solid brass. They are heavy. I don’t think there are too many people living in South Africa who haven’t seen this particular design, especially as this design (the Carina) is still available or sale today! This design has proved to be very popular, and many bathrooms still have these taps fitted and working.

It was always a possibility to use the set on the container house project, as it is brand new. But, to make a smart bathroom, you want all your fittings to match. We had the mixer for the bath, and a partial mixer set for the basin, but bits had been removed for other plumbing repairs over the years (the main reason why the set was bought in the first place). We also did not have a set of anything for a shower. So, in short, we didn’t have a full matching set.

Unexpectedly, Louis managed to find the bits and pieces he needed to repair the mixer for the basin at a really good price. We now had both the bath and basin mixer.

Because each wing of the container house is composed of private space, we have a larger central area that we will all use for entertaining. We decided to include a guest bathroom in the final plan so that our guests didn’t have to walk through our private space. This will also make it easier for when we have our guest rooms up and running for overnight visitors.

For our guest bathroom, we’re putting in both a shower and a bath. The guest bathroom will also work as a backup bathroom for ourselves and will probably be used quite a bit by us before our other private bathrooms are functional. We also decided to include a bath as not all of our private bathrooms are having baths fitted. This gives us the option to bath on those occasions when we just really need a bath for the state of our emotional health.

Because of the above reasons, we would like to get this bathroom finished sooner rather than later. Do we have everything? Well, we now had the fittings for the bath and basin that we require. That’s a good start! Since the shower is a little more hidden, Louis found a set of ISCA taps for the shower, that have a very similar design to the Cobra Carina.

We also have a couple of older shower panels to choose from. We bought a new, standard toilet (nothing fancy). We have a few old baths which we we may go through to see if any are salvageable. We should have enough second hand tiles for the walls. (We have the most awesome plan for this bathroom’s floor, so watch this space!)

So, with all these old bits and pieces, we have to come up with a plan to make a nice bathroom for our guests. The bathroom will probably have a strong retro vibe to it, but hopefully doesn’t feel too dated. Do you think we are up to the challenge?

What About the Basin?

We have two older style, second-hand basins. But they take the standard kind of tap, rather than the mixer type. So, can we use them? We might be able to, although they are not ideal for what we currently have. We’re going to have another scratch in our bin of old plumbing things and maybe we can still use one of them.

In the meantime, just in case, let us know which basin you prefer for our retro bathroom.

Cladding Gaps Between The Shipping Containers