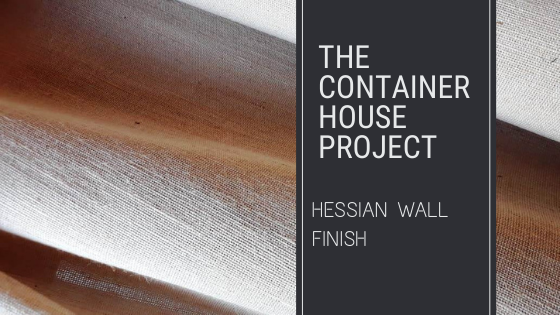 A good couple of years ago, I found an article on the internet (don’t ask me where), on a hessian wall finish. The article focused on a bathroom renovation and the owners had finished their walls by applying hessian to the wall. It looked amazing. It gave the walls such an awesome textured finish. Of course it stuck in our minds.

As our interior walls are boards attached to the shipping container, it’s not a case of us merely plastering and painting, as one would with a brick wall. One can finish the walls that way, but it involves a lot of effort, and from the beginning, we’ve been looking for simpler ideas.

In the south container, Louis did use this technique on some of the walls. Other sections we covered with wall paper. However, over the months, we have noticed that the plaster between the boards has developed hairline cracks, due to the contraction and expansion caused by heat and cold. It’s not a huge problem and it is barely noticeable, but this is something we considered when planning the north side. The wallpaper is hiding the cracks in those areas.

So, of couse, the hessian idea came to mind.

We still had to finish the walls before we could apply the hessian. Kevin ground down all the screw heads where necessary. We spent some time filling the holes with paintable silicon. The joints between the boards were smoothed out with plaster and everything was sanded down. Then came the hard part. How were we going to stick the hessian to the walls?

It was quite a tough decision deciding what hessian to buy. There are several options to choose from, depending on how coarse you want the fabric. In the end, Cindy decided on the finest hessian available, and bought enough for her lounge area.

Once the walls were prepared, Kevin had to come up with an idea to attach the hessian to the walls. Our original plan was wood glue, so we purchased a five litre tub of glue. If it didn’t work, we knew the glue would be used anyway, as Small Scale Engineering itself currently has several wood-work projects on the go for customers.

Kevin stapled the end of the hessian to the top of the wall and let it unroll to the floor, where he cut the length off the roll. From there, he rolled the glue onto the walls with a paint roller, and smoothed out the hessian against the glued wall.

However, after priming the hessian ready for paint, we noticed the hessian develop some bubbles. The paint was causing the glue to lose its grip.

What worked better, in the end, was using paint to glue the hessian onto the walls. We used a cheap plaster primer and once dry, it stuck in place well. We are using a lot of paint per drop, but at least the area is not too big, and the paint quite affordable.

Should you decide to try this, remember that hessian is a natural fibre and will shrink. It would be a good idea to pre-shrink the fabric, but this is easier said than done with such long lengths of fabric. So, we just let it shrink on the wall.

The top part will be covered by cornice and the bottom part by skirtings, so that is fine. We were hoping for a bit more of an overlap between the lengths, but we have some ideas to hide the joins, so we are not worried about that either.

The room is still very much in progress and as such, isn’t very cozy. Just three drops of hessian are up on the wall and the difference is amazing. It looks so much better already. It’s going to look great once the walls are complete. Of course, there are still floors and ceilings to think about too to complete the room.

Many people out there are using hessian as a texture effect on the top half of their walls, above the dado rail. They usually glue the hessian in place with something like a flour/water mix. This preserves the colour of the hessian. It is a great idea and looks good in the right space. In our case though, we are wanting to preserve the texture as it’ll hide any flaws in the wall, and not so much the colour. We are going to paint the hessian in the paint colour of our choice, after application.

A Difficult Experiment to Photograph

This was a difficult project to photograph. Kevin was working by himself the day he worked on the hessian wall finish so it was impossible for him to take photos while his hands were full of glue and paint. Also, how does one take a photo of a wall texture? I’m not quite sure. However, the hessian will add to the end ambiance of the room, so we’re excited about this set of experiments.