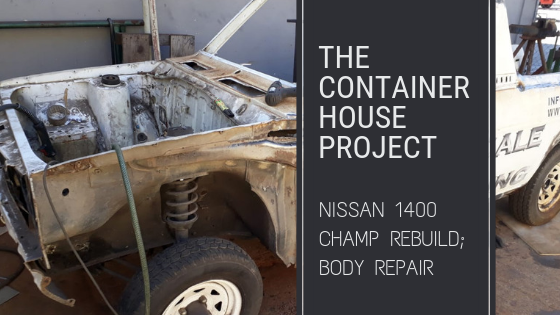 Small Scale Engineering has a Nissan 1400 Champ that is in need of some serious repairs. We bought it some time ago as an affordable, nippy and small bakkie; perfect for getting through Cape Town’s narrow roads to jobs. We decided it is time for the Nissan 1400 Champ rebuild project!

We have three reasons why we’re busy with the Nissan 1400 rebuild now, while we’re trying to build a house:

Not too long after Kevin opened Small Scale Engineering, he realized he needed a bakkie in order to transport himself and tools to jobs and projects. Louis hadn’t joined the Small Scale Engineering team yet so we did not have access to his bakkie. We have a small car that I use to get to my day job, and at that time, Kevin was doing most of his running around on a motorbike. He was struggling to get all the tools he required to various job sites. Kevin decided that he needed something small and nippy that he could use to get around in. He decided that the perfect vehicle would be a Nissan 1400 Champ. Small and easy to repair. Perfect for Cape Town’s narrow roads.

So, we bought one in Mossel Bay and one weekend we drove it back down to Cape Town. Pepito Designs did an awesome job with the branding soon after we bought it.

Obviously, as with every second-hand car, it needed a bit of work but nothing major that couldn’t wait a bit. Kevin used the vehicle on his various jobs for several months and it definitely made a difference.

And then disaster struck! The carburetor stopped working. It wasn’t the original carburetor but a generic one fitted by the previous owners. Kevin got another generic one from an automotive spares dealer and fitted it. It lasted about four months and then that one “blew up” (Kevin’s words). So, now we knew that the generic carburetor isn’t a solution for this vehicle’s engine. Original carburetors for this vehicle are impossible to find, so Kevin had to do quite a bit of research to find what other options would work.

Months passed before Kevin was finally able to purchase something that would work. By this time, the bakkie had been sitting in all sorts of weather conditions for about two years.

Kevin had three major issues he had to repair on the bakkie:

The Nissan 1400 Champ rebuild project has (not surprisingly) turned out into one of those scenarios where you start fixing one thing to find several other issues that need sorting out too. Kevin is not one to do things halfheartedly so he and Louis geared up for a major rebuild project.

Of course, I know what Kevin has planned for the bakkie. At this stage, and in this article, I can only tell you that it is going to be amazing when it is done. No spoilers yet!

The rust was bad. You could see the road through holes in the foot well. The body panels are designed in such a way that they allow rain water to accumulate and sit in pockets. This obviously contributes to the rust problem. Kevin also found previous damage on the vehicle that had been repaired badly.

This time around, Kevin isn’t taking any chances with rust. After removing all the bad areas, he welded in pieces of stainless steel. He also made some adjustments to the body panels so that there are less areas for rain water to collect.

Fun Fact: Cars are not made from stainless steel because it would increase the cost (material costs and manufacturing processes), as well as the weight. Kevin reckons he has only increased the weight of the vehicle by about 4 kgs by repairing it with stainless steel.

Kevin bought stone chip paint for the underside of the bakkie. This rubbery, black paint gives vehicles good protection against stones flying up under the car. Kevin and Louis have also used it to further to protect the car from water and are painting all the hidden areas with the same paint, including the cabin area. We expect that the paint will also help with sound dampening as it is uneven and rubbery. These properties will help it to deflect the sound of the engine. New carpets and a new roof liner will complete the interior.

There is still a lot of work to do. We’ll soon be sharing some more photos and information for this project as it continues. In the meantime, please leave a comment because we’d love to hear from you. What colour do you think Kevin will be or should be painting the bakkie? Something practical like white? Or something more exciting?

How Much Stuff Do We Need?

DIY Aquaponics; To Do or Not To Do

How to Find Space in a Container Home