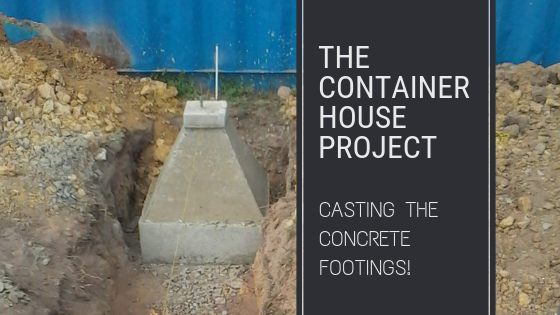 Almost exactly one year after we moved onto our plot, we could finally get on with casting the concrete footings. We were very excited! I keep on going outside to admire Louis’ handiwork because this really is a big deal. Our future house will be standing on those very blocks of concrete. All this hard work, that is now behind us, will keep our house straight and secure. Even though they will soon be buried under dirt and the shipping containers, this is what will support the weight of the house above.

Louis and his team managed to cast all twelve of the concrete footings in one week. Disappointingly, the concrete mixer has turned out to be one of those glitchy things that will only work for one person (seemingly Kevin who was not on site). Therefore, the concrete had to be mixed by hand. Not ideal, but doable.

For every bag of concrete, we used a wheelbarrow of sand and two wheelbarrows of stone, along with the necessary water. To cast the footings, we used over twenty bags of cement. Louis did not follow the formula as written on the bags of concrete, but rather chose to use a formula that will guarantee a slightly harder result. This will allow us to position the shipping containers a little quicker as the concrete will be able to carry the weight sooner.

This is how Louis went about casting the concrete footings:

The footings each have a pin sticking out the top. These pins will be used to anchor the shipping containers to the footings. The pins, which are made from threaded rod, are tied to rebar which is embedded deep into the concrete. Should a tornado ever hit the Western Cape, and the house tries to fly away, the concrete blocks should keep the house tied to the ground. The rebar embedded in the concrete should stop the pins from tearing out of the blocks.

We then filled the base section with concrete. After every few shovels of concrete mixture, the team shook the box around to get rid of any air bubbles because air bubbles would result in weak areas. They only added more concrete when they were satisfied that all the air bubbles had been removed.

We attached the rest of the wooden box mould to the base. As you can see, this was in a slightly pyramid shape. Louis and the team then filled it up in the same manner as the base. Once again the guys made sure to shake it around every few shovels to reduce the chance of air pockets.

Louis then added a small cap mould and cast that. He removed the wooden box mould only when the concrete had cured. And, voila… we had a concrete footing. Louis could then reassemble the wooden pieces for the next casting.

Input from the Structural Engineer

We also had to cast the concrete to the correct MPa rating (hardness), or harder. We have cast a smaller block of concrete for testing. It can be sent away for testing, should it be required by the engineer.

Moving the Footings Into Their Final Position

There was one more thing to do after all the footings were cast, cured and unboxed. We got out the laser measure and measured the distance between all the pins. The pins need to be in the right place, with a only small margin of error allowed, so that the shipping containers can just slot on to them. About four of the footings needed to be moved a few centimeters until they were in the correct place.

We did this by placing wooden boards against the side of the hole, then between the wood and the footing we placed a hydraulic jack. Slowly we used the jack to push the block into place. It worked very well!

One last small note for those of you following our project. Last week’s site inspection went very well. The inspector was only there for about fifteen minutes, but she’s happy with progress and gave us her blessings to continue. Yay!

8 thoughts on “Casting the Concrete Footings!”