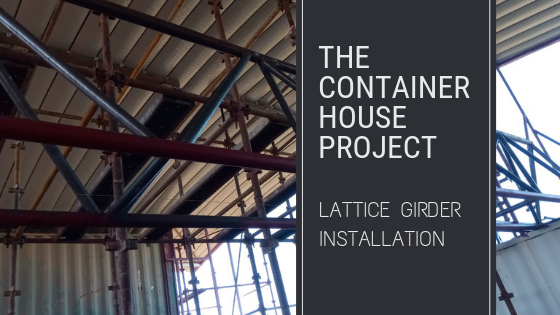 What do you do when your structural engineer asks you to put in another supporting beam after the roof has been installed? Well, you install one, of course! Our next step, therefore, was to work on the lattice girder installation. A lattice girder would be lighter and cheaper than an I-beam and just as strong.

If this is the first time you’re reading our blog, you might wish to know why we are installing a lattice girder. Our K-Span roof installers voiced their concerns regarding the structural stability of the design. They were surprised to discover the roof arcs were dipping on installation. We had limitations in regard to the height of the building as per the regulations as set out by Swartland Municipality. Therefore, for this installation, it is true that the machine and roof arcs were pushed to their limits. A few adjustments to the roof corrected the level, but our structural engineer asked us to install a beam as a backup.

A more obvious choice as a roof beam is a steel I-beam. The I-beam that we would have had to install would have weighed over four tonnes. That’s a huge weight to lift and install under a roof that is already in place. Kevin had a better plan and set about designing a lattice girder. John Moll (our structural engineer) double checked and adjusted the required dimensions for the lattice girder.

Whatever we install needs to be able to take the weight of the entire roof, should every bolt fail and we have a freak snow storm. So, obviously, the lattice girder is quite a monster, but it’s better than the I-beam option because:

The lattice girder is exceptionally strong because of the forces of tension and compression. One evening, Kevin tried to explain it to me while we were washing the dinner dishes. Here’s a brief summary of what I understood:

The first step was to order all the material and have the tubes laser cut for ease of welding. Once all the pieces arrived, Kevin had to decide where to make the girder. He needed somewhere flat to lay out the pieces. It also needed to be an area big enough to take the full size of the girder. He had the option of building it in one of the shipping containers. Building it in a shipping container would have resulted in one big disadvantage. It would have been difficult to move it to the correct place for installation.

Finally, Kevin decided that the best option would be to build it half way up the scaffolding with each end resting on the containers that make the East and West sides of our house. He used the scaffold jacks to level the scaffolding. This ensured that the girder poles were in the right place before he began welding so that the girder would be straight. It has an intentional, but very slight, bow in it which will straighten as it takes the weight of the settling roof.

He began by welding the girder upside down. When he had completed all the welding that he could reach, he then flipped it around, using a block and tackle, in order to reach the other points. It was also then in the correct orientation for installation.

The installation of the rather impressive lattice girder filled me with much anxiety. I had to keep reminding myself that it was light and the weight is only that of about five adults (as opposed to five hatchbacks). How in the world was Kevin going to get this  rather large and bulky girder the full six metres up in the air?

Just before the real work began, the guys had a work break with tea and chocolate. (They needed the energy for a 25 hour day!) They discussed the plan until everyone knew exactly what they were doing. In the end, all it took was the scaffolding, a block and tackle, a bit of leverage and lots of watchful eyes.

The guys attached the block and tackle to the middle of the bottom pole of the girder, so that the girder could swing up and down like a see-saw. Everyone was sure to watch carefully to make sure it did not hook on anything. At the same time, as the girder rose, the team clipped in extra scaffolding poles under it as a safety measure. This way, if the block and tackle gave way, the girder would only have a short distance to fall.

Once they had the girder as high up as they could get it, they swung the west side up and hooked it onto the post where it will sit for the rest of its life.

Once the first side was up, the girder was secured tightly to the scaffolding and the block and tackle was moved to the other end. The team then lifted the second side as high as they could. From there, it was a matter of levering the girder up the last few centimetres while the second post was gently persuaded (with a four pound hammer) into the correct position under the girder. Everyone else held the girder and post in place while Kevin quickly completed the welding.

Kevin welded in a few additional braces into place and the girder was up!

By then, it was late and dark, so no more work was to be completed that day. However, everything was safe to leave as it was, and Kevin did the last of the welding and bracing a few days later. A lick of paint and it was done! The scaffolding was removed ready to return to Scaffolding Solutions.

Our roof is safe! Excellent teamwork guys and our thanks once again!