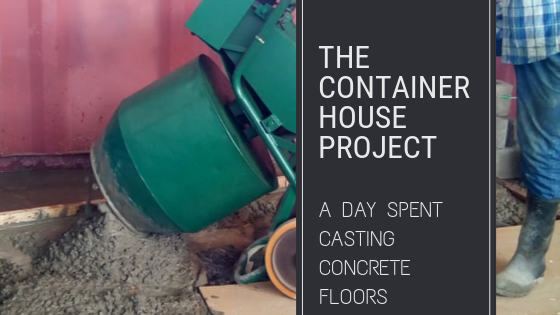 We have to do all the casting for the concrete floors in sections. By the time we have finished all the floors, we will have spent several days casting concrete floors. But our first day is complete and we have a small patch of concrete to show for it!

Casing Concrete Floors in Sections: Why?

On our house, we don’t have a brick foundation to keep the floor in place. Therefore, technically, the kind of floor that we are casting is a “floating” slab, as it can (very theoretically) float around the yard (a hilarious thought) with nothing to keep it in place. Practically though, the containers are obviously going to keep the floor from moving, so we don’t have to worry about the floor slabs making a run for it. 😀

On a normal brick house, the rooms are usually quite small in comparison to our central courtyard area. If you recall, we have positioned the containers in a rectangle, to make an open area in the middle measuring 9.5m x 12m. That’s quite a large space! We also have to account for the expansion and contraction of the concrete as it changes temperature with the weather. If we were to cast that huge slab in one go, we would run the risk of it cracking over time. Therefore, we have to cast several smaller slabs with a small gap in between to allow for expansion and contraction.

The expansion gap can be anything between 1mm and 10mm depending on the purpose of the concrete, how much sunlight it will see, weather in the area, etc. As this slab will be indoors, we will only need to have a gap of a couple of millimetres.

Each slab that we cast should not be bigger than about 3m x 3m. That makes a total of about 12 slabs to fill our central area.

You may recall that we tried to restore an old concrete mixer that we have. Well, the restoration didn’t solve all the problems. The mixer is working better than it was, but is still frustrating to use as it still cuts out at certain angles. Kevin is considering changing it to run off electricity, but in the meantime, we required a concrete mixer in order to cast the floor. So, we hired one of a similar size that runs off electricity.

We thankfully did not have to hire a compactor, as we had already compacted the area in the centre previously. Therefore, Louis only needed to spend time checking that the surface was still well compacted. For that, he used a weight on a pole.

Then of course, we required the ingredients for concrete: sand, stone, cement and water. Additional equipment included a couple of shovels for loading the concrete mixer, and a wheelbarrow, and Louis was set for work.

The first, thing of course, is to prepare the ground. Using planks of wood and some steel rectangular tubing, Louis built a border around the section he chose to cast first. We want a straight floor (believe me, walking on a sloped floor where you don’t expect one, is very disconcerting). Louis spent some time making sure his border planks were level so that it would be easier to cast a level floor.

Then, he made sure that the ground was still well compacted. He also built up the centre so the resultant slab is not quite as thick in the middle as on the border areas. At the border of this slab, the concrete is about 100mm thick, but in the centre it is about 75mm thick.

Louis also put down a layer of plastic. This is for two reasons: 1) To stop plants growing up from underneath the house and ruining the floor and 2) to stop damp from under the house seeping up through the floor.

Thankfully, the concrete mixer allowed us to mix and pour the concrete quickly. Many batches had to be made as the mixer is a smaller design. One batch fills a wheel barrow, and Louis estimates that they mixed about 25 wheelbarrows’ worth. These are the steps he took:

Before the concrete is fully cured, the top surface must be floated. Using a mixture of only sand, cement and a small amount of water, a final layer of concrete is floated on the top. As this layer has no stones in it, it gives a smooth finish to the concrete. It is also harder than the underlying concrete so gives a hard-wearing surface on which to lay your floor finishes. We used a wooden float for this process as it leaves a good finish for the majority of flooring types.

If you wanted an even harder wearing floor finish with no covering over it (eg, garage floor, or polished concrete floor), you’d use a steel float.

We haven’t decided yet on what type of floor finish to fit to the central area once we have finished casting the concrete floors. There are so many options; tiles, carpets, reclaimed rubber, polished concrete, resin, etc. What would your choice be? Leave a comment and let us know what you think we should use once all the concrete has been cast. This area is to be used as our kitchen, dining room, family recreation and entertainment area.