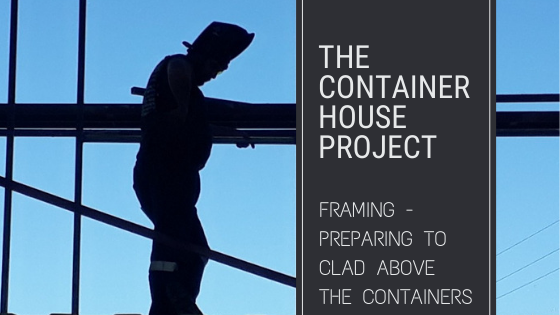 Progress is going well on the cladding of the shipping containers with the fibre cement boards. It’s easy to attach the boards to the containers themselves. However, you might recall that there’s a lot of fresh air between the top of the container and the underside of the arched roof. Obviously the boards can’t attach to nothing. So, what did we do? That’s where framing comes in…

Here’s a photo from a previous article from this blog:

If you have seen American house design television shows, you might know how Americans build their houses. They build a frame, usually out of wood, and then clad the inside and outside of the frame with various panels to make the walls. We’re essentially doing the same thing, especially above the shipping containers. The building of this framework, on which one attaches the cladding/boards, is known as “framing”.

In South Africa, the principle is similar to that of dry-walling. It is a cheaper method for building interior walls and you might have come across dry-walling during renovations of a home or in office space.

On The Container House Project

We didn’t use planks of wood, as in America, or the flimsy dry wall studs, as is common in South Africa. Instead, Kevin used square tubing purchased from Steel & Pipe. Wood is difficult to attach to a steel container. Dry-wall studs might not be the strongest option for an exterior wall. They are also difficult to weld as dry-wall studs are manufactured from very thin steel, and it is also galvanized. (We did use dry wall studs for the exterior ceiling over the deck).

With our method, the end result will be quite a thin wall in comparison to bricks, but it will be good and strong and therefore safe.

Getting the Framing Right

Kevin had to do a bit of planning before he could begin the welding work. He needed to work out exactly where he will be mounting the windows, so that he could make provision for them. We don’t want a length of steel going up where the window is meant to be. He also needed to make the steel frame into which the window would be mounted and can attach. He also needed to consider where the ship-lap boards start and end. For best results, we require something on which to attach the ends.

A welding magnet is a powerful magnet used to hold steel work pieces in place while welding them together. They can be used for several common angles and are very useful in the welding workshop.

Kevin and Louis took a lot of care to make sure that the framing is 100% straight and that the uprights are exactly at 90 degrees to the roof of the container. They used a level and a welding magnet to get it correct. In the photos above and below, the welding magnet is the red arrow shaped device.

With the framing in place, we can continue with the cladding on this side of the house to complete the wall. We will follow the same steps when we reach the West side of the structure.

4 thoughts on “Framing; Preparing to Clad Above the Containers”