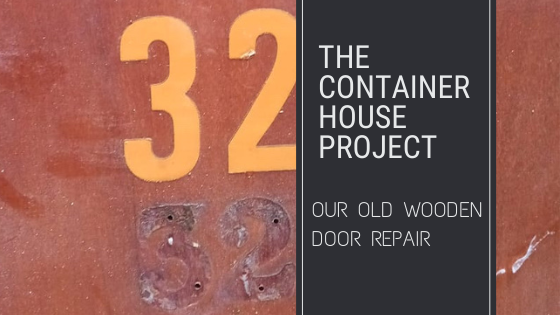 We were given a second hand, wooden, exterior door. Awesome! We needed one for the east container where Kevin and I will finally be living as we won’t be installing a sliding door for ourselves. Kevin was particularly happy. Older wooden doors are made from superior wood to the new ones currently on the market. However, we knew we’d have to expect to carry out a bit of wooden door repair work.

The problem with items such as old wooden doors, is that you cannot always tell in exactly what condition they are in until you start fixing them up. This door had a good coat of paint on the exterior, so it looked like it was in fantastic condition.

The reality was that the door was actually in pretty bad shape.

Previously, someone had tried to repair the door by glueing on a new piece of thin marine ply to both sides of the door. This hid a lot of the previous damage and it is the reason why the door looked to be in such good condition.

Previous installers had also cut the door to a smaller size than standard. It was too short and too narrow to fit in the door frame fitted to the container.

Because the door had been cut so short, the end grain of the wood was exposed at the bottom where it comes in contact with the most water. You want the bottom and top of your exterior doors to be showing the longitudinal grain as this rots slower than the ends. If you think how a normal plank of wood rots, you’ll see that this is true; it rots the fastest from the ends, not the middle.

On pealing off the additional plywood that had been glued on previously, Kevin also noted that the lock block area was showing the scars of having worn several different locks over the years.

So, there were lots of repairs and modifications needed.

The door itself still had a very old door bell attached to it. It didn’t seem to be working so Kevin opened it up. It works like an old bicycle bell (but about four times the size). Sadly, the broken mechanism is missing a few pieces.

On pealing off the plywood skin, we found the remains of the old door number. Who knows how many years this has been hiding just out of sight!

Now that all the damage had been assessed, it was time to get to work on the repairs. In retrospect, Kevin said that if he had known how bad the damage actually was, he probably would not have used this door. It was a lot of work to get it repaired and strong once again. However, by this time he had already got this far, so he continued with the repairs. It also allowed us to use up some of our scraps of wood.

Kevin solved both the problems of the door being to short and of the exposed end grain by glueing new pieces of wood to the top and bottom. He used some of the left over teak from the counter tops as this is a very hard wearing wood and will stand up well against rot.

Kevin then cut out a section around the lock block, and with a router he made a rebate. He glued in a new piece of American pine, flush with the rebate. Over that he glued in some birch ply so that the area was now flush with the door itself.

On the hinge side, he glued a strip of poplar as this wood is “stickier” and will hold the hinges well.

The old door itself was fabricated from meranti, Oregon pine and mahogany plywood. The repairs were made with American pine, oak, teak, poplar and birch plywood. I count eight different species of wood! There’s nothing for it; we are going to have to name our new door Frankenstein, after Mary Shelley’s book (although technically, Frankenstein was the Doctor and not the monster).

Getting Ready to Fit the Door

Lots of sanding, skimming, a lick of paint or two, and the door will ready to fit. We’ll also need to source a good quality exterior door lock set and some hinges. For now we’re only using the door to board up the doorway.

Do you think we were crazy to take on this wooden door repair work? Or do you think it was pretty cool that we were able to upcycle something that would otherwise have been thrown away?

Cladding Gaps Between The Shipping Containers