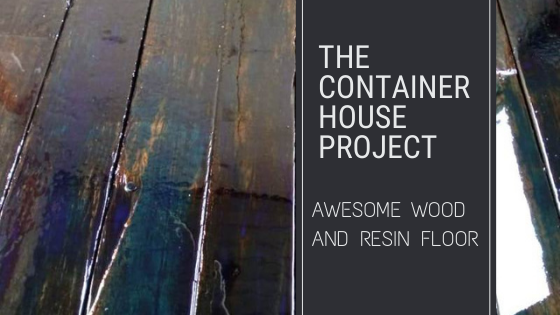 This wood and resin floor has to be the most exciting project we have worked on to date. I have been looking forward to accomplishing this task, ever since we decided to do it. It was a total experiment. But I say, chances to experiment are rare, so experiment away! Even though we had been putting this off as we were a little nervous as to how it would work out, I can now say that we are very pleased with the results. Our wood and resin floor looks awesome.

Our oldest shipping container has solid wood planks for the floor. The wood is probably mahogany or teak; more likely mahogany. Newer shipping containers have plywood sheets. Plywood is great as a solid base for flooring, but not very exciting for the floor itself. We really wanted to use these planks as the floor in one of the rooms. We couldn’t use it in the home office because of the huge piece of steel embedded in the floor in this area (that would have made the room freezing cold in winter if left bare). In the entrance way of our house the wood was rotten from holes in the roof. That left our 90’s retro guest bathroom where the condition was much better. So, a resin floor is not very 90’s, but it’s too great an opportunity to miss.

We had quite a debate as to whether to use resin or just varnish on the floor. The wood is decades (probably) old and very rough. It has lots of deep pockets and huge gaps between the planks. If we are to be able to keep this floor clean, some of those gaps would have to be filled in; at least a bit. We thought resin would do a better job at filling in the holes than varnish. Also, with resin, we could add some blue tint for more interest.

So, we decided on resin. But Kevin and I, from the start, had differing ideas on how to accomplish this task. Even though Small Scale Engineering has worked on resin projects before for customers (such as this resin table below), this is quite a different scenario altogether, and we were not sure what to expect. In the end, we decided to just wing it and see what happened.

How do you clean dirt and loose splinters from old wooden planks? We could have spent several hours with an orbital sander or similar, sanding the floors. This is how you would deal with it in a conventional house with wooden floors. We decided against this as we wanted to keep the rustic texture. We wanted to show off the rough nature of the planks and the large bolts holding it all in place. Therefore, a wire brush was the way to go.

Wire brushing this by hand was going to take way too much elbow grease, so Kevin purchased a vicious wire wheel that runs off a pneumatic tool linked up to the air compressor. It still took a while to scrub out the entrenched dirt and remove the loose splinters of wood.

Shipping containers are often fumigated before shipping, so we didn’t know what chemicals from fumigation or spills has soaked into the wood. Also, it’s not good to breathe in too much wood dust so Kevin was sure to wear his PPE to protect his lungs and eyes.

It was so great to watch the wood emerge from the dirt. You can just see how dirty the floors were to start off with on our blog post on fitting the close coupled toilet. (We removed the toilet before working on the floor. It will be easy for us to refit at a later stage, now that all the plumbing is in place).

We doubted very much that the tongue and groove planks were water tight. Kevin and I both suspected that the liquid resin would run through any gaps in the wood. We did not want to just throw away the resin like that, so we decided to paint on the first layer. This would hopefully seal any gaps before we poured the next layer.

Kevin mixed the Kristal 6 Diamond Coat resin (purchased through AMT Composites) as per the ratios on the packaging and added in some blue tint. Then Kevin got to work with a paintbrush, making sure to seal up the gaps as best he could. At this stage, the resin looked black against the wood and we did not know how it was going to work out. If it remained black, it would have been extremely dramatic and also very awesome, but not quite what we had in mind.

A few hours later we checked on the floor. The sun was in a different position and the resin was curing. It was looking fabulous! The curing resin was reflecting light almost like an oil slick and we could see all colours of the rainbow; blues, greens, purples and red-browns.

The wood itself was so dry that it sucked in the resin like a sponge. Surprisingly, it sucked in the blue dye as well, only leaving patches of it on the surface where deeper puddles had collected. The end result was the kind of vintage look that many people have been purposefully trying to recreate on DIY projects over the last few years.

Once the first layer had cured, we mixed a second batch. This time around, we put in less dye so that the resin would be a lighter blue. This batch we poured directly on the floor. An off-cut scrap of PVC ceiling board made a great squeegee to move the resin around.

We were still concerned that some of the resin was leaking through the boards, so Kevin bravely (snakes and spiders!) put his phone into a hole in the boards that had been cut for plumbing pipes. With the phone in place, he took a photo so we could see under the floor. We did lose some resin, but there wasn’t too much we could do about that.

Once again, it was spectacular watching the resin change as it cured and the sun moved, lighting the room differently.

The end result is a wonderful floor that I just love and cannot get enough of.

However, the resin can take up to 72 hours to cure, and it still seems a little squishy as we post this blog. Something might have gone wrong with our mix. Let’s hope it’ll be okay!

From here, Kevin and I are not sure whether or not to add a third layer of resin. He envisioned a floor that was as smooth as glass, with the wood and its textures shining through the blue-hued resin.

I think that the result as it is now, with some remaining texture, would be better for traction with wet feet. How slippery is resin when wet? It might not be a problem at all. People would step onto a bathmat when climbing out the shower in any case.

So here’s your chance to give your opinion. Do you think we should leave the floor as it is now, or add a final layer of resin to make a glassy-smooth surface?