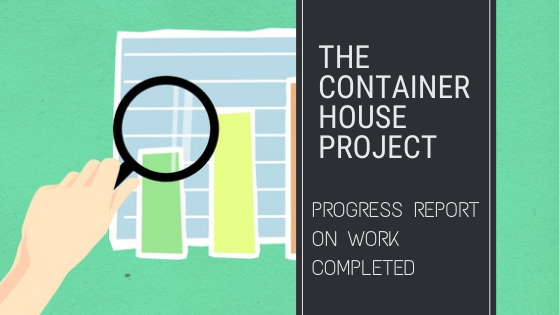 It was difficult choosing a topic for today’s blog post. We’ve been working on a few small things, but nothing really worth dedicating to a full blog post. Therefore, in the end, I decided on a progress report. It showcases a few of the smaller items we have been working on, but are as of yet incomplete.

Not So 90s Bathroom

Kevin has started the tiling in our guest bathroom that was originally going to be a 1990s styled bathroom (and now probably is not). We have a problem in one of the other bathrooms that we finished in that the expansion and contraction of the container has cracked the tiles where the fibre-cement boards join underneath the tiles.

Some of the tiles in the guest bathroom are a lot harder than the tiles in the other bathroom. Kevin is concerned that if these tiles crack with expansion/contraction, the result might be a lot more spectacular than the hairline fractures to be found in the first set of tiles. (A bit disappointing but glitches are to be expected in an experiment of this magnitude). Kevin is ruminating on that problem before he continues with the tiling.

In the meantime, we bought a bath. It’s bigger than the size we originally catered for, so Louis made some adjustments to the plumbing.

I mentioned in a previous article that Kevin and I will be moving into the top container that we designated as guest rooms. We’ll be there until our ‘wing’ is complete. Kevin has installed the last of the doors and windows. The cladding on the North side is complete. We just have to add the trim.

Now that the doors and windows are in, we can begin the interior cladding. We have bought chipboard (US particle board) for this. Working together, we managed to maneuver the large boards up in preparation for cladding.

Much of our personal items (such as curtains, kitchenware, etc) that are still in boxes were stored up there, so we spent some time pulling all the boxes down out of storage, going through them, and finding a new spot to stack them.

The end plan is for Kevin and myself to have our bedroom on top of our personal container (east). Because of this, we decided to put a deck up above the south container’s stoep (South African for veranda). Cindy’s sliding door opens up onto a small stoep which will be a wonderful spot for morning coffee. We wanted to put a roof of some kind to protect it (and her!) from the elements. The deck leading out from our bedroom killed both proverbial birds at once. Kevin has started working on this. He is using a thick sheet of fibre-cement board under our deck floor (finish still to be decided).

Kevin has put in extra wooden support beams between the steel. We used a product called Powafix Carbolineum to protect the wood from rot and insects. We will be able to use the wooden beams to fit PVC ceiling boards. It is going to look smart once completed. I can just imagine it set out with a little table and chairs and a few pot plants.

We wanted to have our gutters and water tanks installed by this winter. It hasn’t quite happened so we’ve been watching our rain drain away. However, we have begun with prep work on this too. We bought two huge water tanks. As our ground is full of clay that tends to get a bit squishy when it has been raining, we need a secure place to put them before we can start using them. We’ve started building a base for the tanks. Not quite complete, but as they say, “well begun is half done”.

All these small things add up and it’s a wonderful feeling to be able to see progress and to tick things off our list.