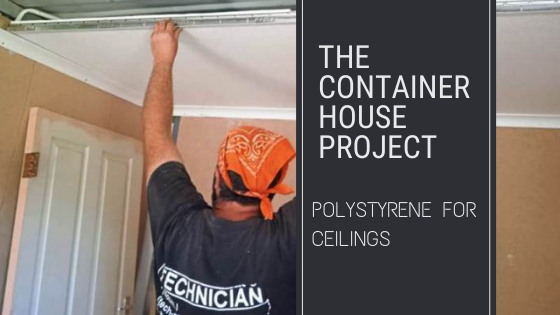 There are products out there that use polystyrene for ceilings, but they are usually coated with something, or moulded to look less like polystyrene. But what about using plain sheets of polystyrene? Well, we’re trying it out.

Kevin has been busy cladding the interior of the fifth container that sits on top of Cindy’s north container. The long term plan for this container will be guest rooms, or additional study space (work from home), or for whatever else we need space. The short term plan is somewhere for Kevin and I to live while we spend a bit more time perfecting our east container.

It’s taken a bit of thought, because we need to finish it so that we can use it as our private living space (probably for a couple of years). But in time, we also need to be able to easily convert it into guest rooms. Our plan was always to use cupboards as room dividers. We’ll be leaving out some of the cupboards for now, so that we can use the gaps as narrow doorways. When it’s time to convert, all we have to do is slip in the additional cupboards and/or shelves to divide the space.

But this post is about using polystyrene for ceilings. A lightweight product that is a good insulator (and it can be recycled using orange peels).

We visited a local polystyrene supplier to discuss ceiling options and were offered some slightly damaged, 40mm thick, sheets of polystyrene. Polystyrene is good for insulation, but the best bit is that they were going for such a bargain. We had to snap them up. Better we use them for unusual ceilings than they go to the dump. We were really pleased with our find and excited to start with our experiment.

Kevin is fitting these ceilings a little differently to how we have done it in previous areas. We glued on the cornice first! Did you expect that?

The idea is that once the cornice is up, we can just slide in the sheets of polystyrene. We will be using some T-pieces such that you find used for office ceilings to help support the edges. We ran a test on one end of this container as we had a T-piece left over from previous installations. It worked so well!

The cornice is also polystyrene so Kevin was quickly able to glue them in place with paintable silicon (caulking). He did add a few chipboard screws as a precaution. We then slid in a sheet of the polystyrene. Afterwards we stood back and admired our handiwork.

Once we have the rest of the ceiling boards up, after buying some more T-piece lengths, we might paint the boards to give them a little bit of protection from damage and make it look a little less like polystyrene sheets, but it might not really be necessary. So far, I’m very happy with our bargain ceiling. It was very much worth the experiment.

The space is coming along nicely. We have started on some of the painting work. We have a couple of barely used, second-hand carpets that we can use for flooring, so we’ll soon be trying our hand at fitted carpets. A couple more cupboards and we will be able to move in!

8 thoughts on “Polystyrene for Ceilings”