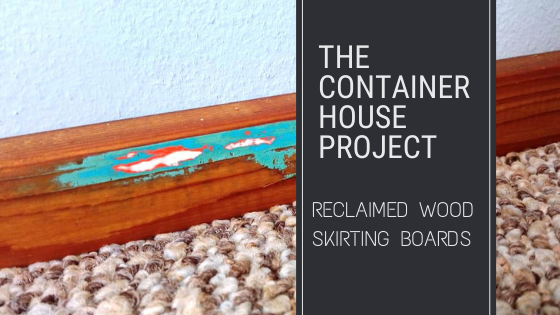 New lengths of skirting boards purchased from your local hardware store are surprising expensive (as they should be if the wood is from a sustainable source). But nothing is stopping us from using reclaimed wood, so that’s exactly what we did.

Where Did We Get the Wood?

A few years ago Small Scale Engineering did some maintenance on an older house. The house had a veranda. Previouslly, builders had covered the eves in this section of the roof with slats of wood. Over the years, rain water had damaged the fascia and some sections of these slats. During SSE’s maintenance, the decision was made to remove the slats altogether, as they were also attracting insects and birds’ nests.

We discarded the very rotten pieces but retained as much of the wood that had been used for the slats as we could. When we removed the decades of layers of paint, we revealed that the original builders had used Oregon pine. We’ve slowly been using up the slats of wood (all in varying lengths depending on rot), but to date, reclaiming them for use as skirting boards might be one of the more exciting things we’ve done with them.

The Process of Reclaiming The Wood

A planer made short work of removing the old paint and revealing the good wood hidden underneath. In some sections where there was a depression in the wood, the paint ran a bit deeper. Planing this away revealed older coats of paint so occasionally we got streaks of paint along the wood. Kevin left it like that – as he says, people pay good money for the look. We don’t have too many patches of old paint, so in one or two areas, it’s a nice hidden surprise for anyone who takes the time to notice our skirting boards.

After planing the wood, we sanded down the strips of wood to until they were smooth. We did this by hand. As the hand-sanding is quite hard work, we did not do everything at once, but completed a few strips at a time.

After sanding, Kevin oiled the wood with linseed oil. Kevin chose this method over varnish mostly because it is quick. The only real disadvantage to using linseed oil over varnish is that the oil might transfer to clothes as they brush past (plus linseed oil soaked cloths have a tendency to spontaneously combust). Oil transfer isn’t too much of a problem for skirting boards.

Once the oil had soaked in sufficiently, Kevin measured and cut the wood to the correct length and installed them as skirting boards.

Yes, our reclaimed wood skirting boards don’t quite look like standard skirting boards. However, they are serving their purpose in protecting the walls and making a nice transition between flooring and wall. Additionally, we got to reuse something that many would otherwise consider rubbish. We are pleased with the results.