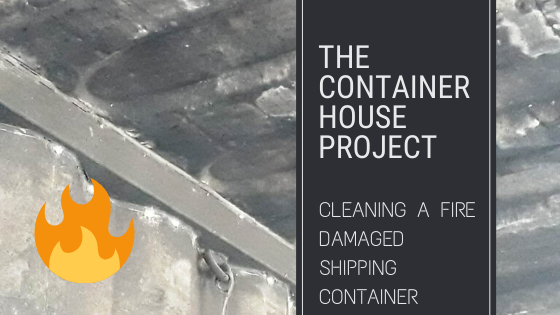 This post is about our experiences on what was possibly the worst thing we have had to do so far, to build our container home. It is no easy task to clean a fire damaged shipping container. It was so awful, I couldn’t help myself but laugh when I was standing under a shower of sooty, soapy water.

The work for this little chunk of work got us so wet and grimey I couldn’t take as many photos as I would have liked. The photos all show Kevin demonstrating the work, but we worked together to get the container clean. Louis, on the other hand, cleaned out the first container all by himself a few months ago, in winter, when it was a lot colder and probably even more unpleasant.

We have two fire damaged shipping containers, to be exact. The arrival of these two containers was particulary exciting because they were exactly what we were looking for. We wanted damaged containers that were no longer sea-worthy, from which we could make our house. These two had been used previously as buildings of some sort, until squatters got in and lit fires on the interior.

Not too long after that, we had them delivered to site, still full of soot and ash, rubble, burnt out electrical components, bits of insulation, a lot of broken glass from the windows and a disgusting smell of urine. Did these two burnt out smelly husks still spark joy? Maybe not quite so much.

We boarded up the doors so that our pets could not get in and hurt themselves. We let them sit for a few months. Thankfully the urine smell dissipated and we felt a bit more enthusiastic about cleaning them out. Louis had a bit of spare time one day and bravely tackled the first container. Kevin and I recently tackled the second.

The first thing to do was to remove all the rubble and other detritus. We swept it as best we could into manageable piles. Using a shovel shovel, we moved the larger chunks into empty dog food sacks ready to take to the dump.

We have a bit of a problem with mosquitoes on site. We knew that there were many living in this particular shipping container. This gave us added motivation to get to work and get the container clean. It is very disconcerting to have a swarm of mosquitoes fly up into your face after dislodging a pile of rubbish. I don’t know how to describe just how many mosquitoes were hiding in the container, in a believable way. I barely believe it myself and I start itching just thinking about it!

Once the big chunks were out, we swept up as much of the soot as possible.

Scrubbing the Surfaces of the Fire Damaged Shipping Container

Kevin mixed up a bucket of soapy water and added some bleach. Using that and a broom, we scrubbed the floor, walls and roof of the container.

The aim was to remove the loose dirt. Some of the soot has baked into the interior paint so we would only be able to get it clean to a point. Once everything was thoroughly soapy, we pulled out the pressure washer to wash the soapy water down the walls. From there we used the pressure washer and brooms to sweep the dirty water out of the container. We used as much of our collected rain water as possible for this exercise but had to use some municipal water as we only had a small amount of rain water.

The pressure washer experience was one we will never forget. Of course, we used eye protection because we did not want the black soapy water in our eyes. We had water raining down on us from the roof of the container. This obviously dripped on our protective glasses so in about two seconds we were soaking wet and blind. And this is where I just stood there and laughed, probably looking something like a crazy chimney sweep that had got caught in a downpour. The absurdity of it all!

Getting Rid of Those Mosquitoes

Once the fire damaged shipping container was clean(er), we had to do something about the mosquitoes. They really are a huge problem (along with flies). We used a tactile poison that is especially formulated for mosquitoes. It doesn’t affect small animals or humans once it has dried. A week later, as I type this, I can confirm that we have seen a good reduction of mosquitoes in our current living areas.

Once the container was clean we also could finally see the previous owner’s choice in vinyl flooring (mustard yellow).

Later that day, Kevin and I were sitting and eating our lunchtime sandwiches. I asked him if he knew the container had a yellow floor, because I certainly didn’t as it was covered in such a thick layer of soot. “No,” he responded between bites. “It’s not much of an improvement.”