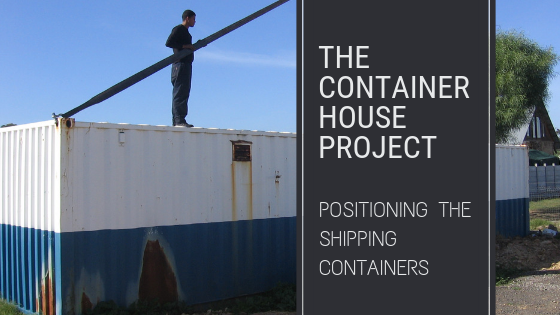 The one day I’ve been most nervous about was the day that we were finally ready to work on the positioning of the shipping containers. Would everything run smoothly on the day we finally placed the containers in their final resting places? Was I right to be nervous? We’ll let you decide …

We decided that we would position the containers on the day that we brought in the last container. This way we could avoid having to pay the transport company to make a special trip to bring out a crane. Therefore, after the concrete footings were cast and ready, we began looking for our last container.

Buying shipping containers is a funny business. The sales reps we deal with are not usually in Cape town, and from their offices in Johannesburg and Durban they arrange the purchases and deliveries. Most containers are sold from a depot to which civilian access is not allowed. (This is why you should always deal with a reputable business.)

Container King, whom we have used for most of our deliveries for private container purchases, did not know of any damaged shipping containers available for sale. We therefore contacted another company we have bought a container from and they had a damaged one available for sale. First thing the next morning, after receiving the quote, we sent them the go-ahead to invoice us and arrange delivery. Unfortunately the seller then decided to not sell after all. We had to start again looking for our last container. All the April public holidays were slowing things down too.

We ended up having to buy a more expensive container. This is not necessarily a bad thing because it means it is in better condition. This container would have a second one stacked above it. By the time we were ready for delivery and for the final positioning of the shipping containers, we had three days before the roofing team were expected to come in to install the roof. This did not leave Kevin much time to complete the welding necessary before the roof was to be installed.

We made the necessary arrangements for the delivery of the last container and arranged to have the other containers we have collected over the last year positioned at the same time. We all took the day off work and waited impatiently for our last container to arrive.

Finally, the truck with the container itself arrived at about 4pm in the afternoon. We asked the driver about the crane. We we were worried about having enough daylight left to accurately place the rest of the containers. The driver didn’t know when the crane was arriving. He spent the next few hours alternatively trying to call his office for an update and having cat naps in the cab of the truck.

Google informed me that sunset was just after 6pm that day. The crane finally arrived at about 6:30pm. It was already dark and too late to move shipping containers around. They had also brought a side loader instead of a crane; the wrong equipment. A side loader cannot place containers directly next to each other like we required. We were extremely disappointed and angry about the waste of the day. All they could accomplish in the dark was to off-load the last container (a mustard yellow one).

The next day, after contacting the company that had originally arranged everything, they sent out someone presumably from a different rigging company, to have a look at our site. He was extremely negative. He made it quite clear that either he didn’t want to do the work, or would only do it for a much higher fee than we were initially charged (and had paid for up front).

We decided we didn’t want him or his company back on our property. We had to come up with another plan, so contacted Container King once again.

How Container King Saved the Day!

I phoned Neil of Container King on the Friday afternoon and explained the situation to him. It turned out that an email I had sent him a couple of weeks before had gone astray. The lost email had contributed to our decision to go with the other supplier. He was very sad to hear about our dilemma and jumped into action from his desk in Durban.

At 7pm that evening, we had an entire team from Container King’s preferred rigging company on our site discussing the situation by torch and car headlight. What a difference in attitude! Within ten minutes they had a plan of action and could foresee no problems in completing the work.

By 11am on Saturday morning, I had the quote and two possible time slots for the job.

The roofing company and we were mutually happy to postpone the roof work. Thankfully that timing all worked out in the end.

Unfortunately, as per above, our initial plan didn’t work out, so we did have to pay for a truck and crane to drive out to us a second time. However we were very happy to have a trusted team on site exactly one week later. We were expecting them around lunchtime. They even arrived early at around 10am. In less than two hours, all the containers had been placed into position, with no fuss at all.

Okay, so we did have two small glitches. But they were both our problems – not problems with the rigging company who helped with the positioning of the shipping containers.

The first was with a small window set into the side of the one blue and white container, which had been previously used as a building of some kind. The frame of the window sticks out the side of the container by 25mm. We didn’t think about the window, but this frame has pushed the next container, the red one further along by 25mm, which in turn pushed out the yellow container by 25mm. As a result, the edge of the yellow container’s corner block was sitting right on the bolt that we used to attach the metal plate to the concrete footings. The bolt was supposed to sit in the middle of the corner block where there is a hole used for securing the container to trucks and ships.

The rigging team asked us if we wanted to deal with the problem before they unhooked the container, but Kevin said no. He later attacked the problem with his oxyacetylene set and melted the metal around the corner block and bolt until the container was sitting level on the metal plate and effectively welded into place. Our house is going to be 25mm longer than expected. I don’t think anyone will notice.

The second problem was a really silly problem. Shipping containers are extremely useful for storing things. We have been using them to store the odd thing for the house project. For instance, one of the containers has a few bags of cement left over from casting the footings. We forgot that the generator was stored in the green container, and as you can see from the picture below, the doors are no longer accessible!

Kevin needs the generator in order to do the welding as our electricity supply is not powerful enough. He solved the problem by cutting a door into the side, above the red container, approximately where we’d need one anyway. We can now access the welder.

A Huge Thank You to Container King and the Rigging Team

We cannot thank Container King and the rigging team enough for their quick response to our plight. Their professional and positive attitude have saved this project. The positioning of the shipping containers went extremely smoothly, in the end, thanks to them.

If you, our readers, require any assistance in regards to shipping containers anywhere in South Africa, we obviously recommend Container King!