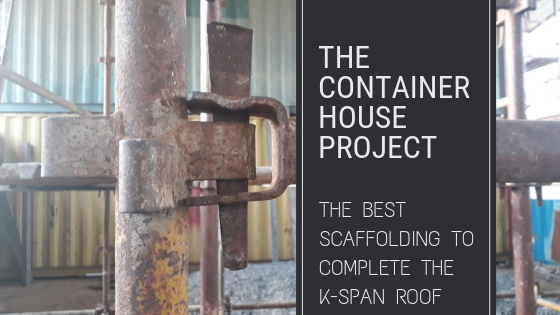 We hired a lot of scaffolding in order to complete the work on the K-Span Roof. We hired our favourite system because we believe it to be the best type available in South Africa. Do you want to know what three and a half tonnes of scaffolding looks like? Read on…

Why we Need Scaffolding

We recently wrote a post on the installation of our very exciting K-Span roof. As with any prototype design, glitches were expected and glitches arose. This has resulted in the roof having a few valleys and hills that we wish to correct. We arranged to hire a truck load (literally!) of scaffold parts to make a safe environment in which Kevin can jack up the roof.

There are several types of scaffolding such as the standard H-frame. You even get specialty systems that are lightweight and less likely to damage your floor when doing interior work. We didn’t have to worry too much about the floor because our floor is still currently just sub-base stones.

Small Scale Engineering do own some Kwikstage scaffolding, but not enough for Kevin’s plan to straighten the roof. We were therefore on the hunt to hire quite a lot more. Kevin estimates the weight of the scaffolding to be about three and a half tonnes. We found an awesome company that hires out the Kwikstage System – Scaffolding Solutions. Not only does this friendly company hire out all the pieces, but they also can provide labour to erect it on your behalf, should you wish them to do so. We have found them to be reasonably priced too.

Kevin decided to erect the scaffolding himself, along with one other person. That’s how great this system is – two men can erect all these poles and hook-on boards with no other help. Kevin decided to do the work himself as it is easier for him to control the outcome this way.

Now that the scaffolding is in place, Kevin is ready to jack the roof in order to eliminate the hills and valleys. He’s going to use the scaffolding from Scaffolding Solutions to do just that. So stay tuned for further updates!