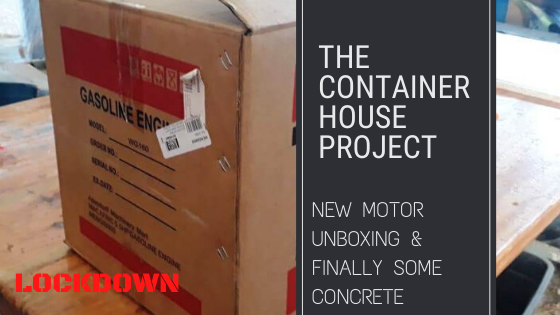 After several months of fighting with concrete mixers and much frustration, we donned our face masks and drove to Adendorff Machinery Mart where we bought a new petrol motor. After all the problems, the arrival of our new motor seemed a momentous occasion; so much so that we took a series of motor unboxing photos. Finally (spoiler alert!), some of the concrete that we require is mixed and poured with our very own mixer (and not a hired one).

We bought Adendorff’s smallest motor which is the 5.5hp petrol one. It’s a little bigger than we need, but it just means that it won’t have to work very hard to run the mixer. It’s the kind of thing you usually find on top of lawn mowers.

We were surprisingly excited to open the box. After all, it’s just a small petrol engine. But, this could mean an end to our concrete mixer woes! The funniest thing about opening the box, however, was that we discovered that our new motor looks 99% identical to the old one that has caused us so much grief.

Starting and Installing the Motor

That very same day, we started the motor. After removing all the packaging, Kevin filled the oil reservoir with oil and poured petrol into the petrol tank. With bated breath, he pulled the pull cord to start it. It started up first try! After letting it run in a little while, Kevin stopped it and got to work mounting it to the concrete mixer’s frame.

What a difference! The new motor runs the concrete mixer much more smoothly than the old one, at barely above an idle. Louis voiced his regrets on not having bought another motor months ago. As soon as possible, it was put to the ultimate test; mixing concrete for pouring.

Louis and Kevin could barely keep up with the mixer. Within seconds of being loaded, two wheelbarrows of fresh concrete was ready to pour to make a porch (stoep) in front of the south container’s sliding door. Several loads later and the porch was cast.

Even though we still have several blocks to pour on the inside of the house, we decided to do this one first for a couple of reasons:

Once the concrete was cast, Louis dusted it down with a dry mixture of sand and cement and floated it with a steel trowel. This gives the concrete a nice hard top layer.

Finally, we covered the fresh concrete with plastic.

The plastic helps keep the direct sunlight off the concrete. This keeps it damp. The longer it stays damp, the harder the end result. The plastic also helps protect the fresh concrete from drips off the roof. We do not yet have gutters and the morning dew dripping off the roof at this stage, will make holes in the new concrete.

We are expecting a huge Cape storm this week, so we’ll keep the plastic in place until sometime after the storm.