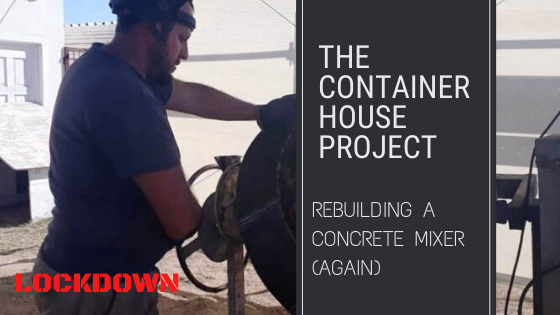 Our last concrete mixer refurbishment was a bit of a flop. Despite all the work, the motor still stalled every time you tipped it over when it was running. So we had the tough decision to make; buy another concrete mixer or buy a new motor. In the interim, we hired a concrete mixer whenever we decided to pour some concrete. Then, unexpectedly, we found another second hand one at a bargain we could not refuse. Once again we found ourselves rebuilding a concrete mixer.

Concrete mixers are expensive. We were not expecting to find a second hand one that was affordable. We were surprised when we came across one that was in a terrible state but going for almost nothing. So we bought it. Kevin knew that he could get it working and once we finished the container house project, we could sell it and probably make a small profit on our investment. It would also save us quite a bit in hire costs over the next few months.

Only when we got it home and started working on it, could we see exactly how badly damaged it was. Years of encrusted concrete was hiding a lot of holes. But happily we had something repairable.

The biggest problem was that the drum itself had cracked in several places. This means that if we were to use it as was, when it came to adding the water to the sand, stone and cement, all the water would all leak out before it had a chance to mix in properly. The main ring gear bearing was still good as was the pulley that the motor uses to turn the drum, and those were the bits we needed the most.

In the end, we had to replace the bearings, make a new drum, and fit a motor.

There was quite a lot of work involved in repairing the drum. Kevin stripped the concrete mixer’s drum down to bare bones and set aside the ring gear. We needed to find some material for the new drum. In the nick of time, just before lockdown, Steel and Pipes for Africa found a solution for us and sold us a piece of tarnished galvanized steel that made the rebuild worth our while. Galvanized steel is not necessary on a concrete mixer, and does make it a little more tricky for the welder as the galvanizing gives off toxic fumes. However, in every other respect it was the perfect material.

Now it was time for the hard work.

Kevin used the removed drum piece to shape the new drum. He used a ratchet strap to bend the material around the old drum to get the correct size. Once it was correct, he clamped it and welded the pieces together. Then using G-clamps as handles, we lifted the new cylindrical shape off the old drum, ready to weld onto the old drum’s base.

The hardest part was trying to work out the shapes for the cone on the front of the drum. It has been a very long time since we used this sort of high-school maths! Our end result could have been better, but it was more than good enough for our purposes. Lots of welding ensued on both the inside and the outside of the drum to make sure there are no leaks around the seams. Due to the nature of the toxic fumes given off by the galvanizing, Kevin was sure to use his PPE, especially when welding on the inside.

Once all that was done, Kevin attached the mixing paddles on the inside. He added a reinforcement ring around the opening. Kevin reattached the ring gear and checked to make sure it runs smoothly.

At least now we know that there is another problem with the motor and it has probably had a manufacturing fault since the day it was bought. The good news is that as soon as we purchase a replacement motor, all we have to do is fit it and we’ll be able to mix concrete whenever we want.

Hopefully we won’t find ourselves rebuilding another concrete mixer for this project again any time soon!