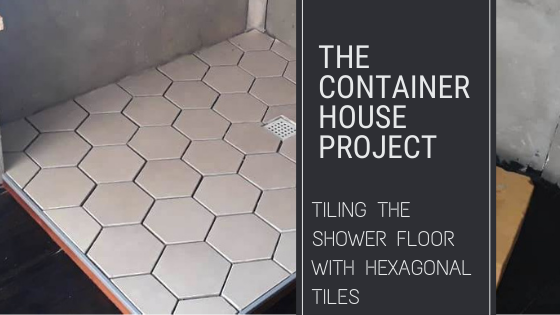 Kevin could not wait to get to tiling the shower floor with the hexagonal tiles he spent so many hours cutting to size. Guess what we spent this past weekend doing? Yes, you guessed right! We were tiling. Well, technically, Kevin was tiling while Gwen and I passed tiles and tools, and helped with the cleaning up. But this was super because I also couldn’t wait to see how the floor would turn out.

It was a bit of a tricky floor to tile because some of the shower floor goes over the wooden planks originally installed in the shipping container. That bit is quite flat and we need to get a good slope on the floor so that the shower drains properly. I forgot to take a photo of the “before”. However, you might recall this photo from the article on the resin floor:

On the right hand photo, Kevin is kneeling right in the space we have allocated for the shower. You can just see that we have poured some concrete around the drain area, but a fair amount of the shower floor is right over the wood.

To get a good slope, we had to start quite high up on the edges, which meant building up the sides. How were we going to make the step aesthetically pleasing?

The second problem was to do with the hexagons. Without fancy computer-aided cutting equipment, it is all but impossible to get the hexagons 100% accurate. We found that using the plastic tiling spacers wasn’t working in this situation due to the slight variations and hexagonal shape. But, that’s no different from many standard tiles for sale on the market so Kevin knew what to do.

The Solutions For Tiling the Shower Floor

To raise the shower floor, Kevin added a border out of a hard wood and over that he attached a polished stainless steel tile edge strip. Once the wooden strip has been painted with the blue we used in the resin, it should blend in with the wooden floor planks. The resin will also protect the wood from any water that might accumulate in the corners. However, it is very unlikely that the wood strip will be affected by water in any case, as Kevin is making sure to make the shower floor waterproof. He also purposefully used a hard wood that is more water resistant and very slow to rot.

Under the tiles he added a piece of steel mesh so that nothing will crack in the shower should we have any issues with contraction and expansion. We used a bonding liquid in the tile adhesive mix.)

The stainless steel tiling edge in the photo below still has its plastic covering on to protect it from scratches. We’ll only peel that off at a later stage.

As for the gaps between the tiles, Kevin judged them by eye. His previous experience with out-of-square tiles made this easy for him to do. He just kept an eye on the tiles as the tile adhesive cured to make sure none of them slipped out of place.

Once the tile adhesive was dry, we scraped out the excess from between the tiles to prepare for grouting.

We had a little bit of tile cement left over after completing the floor, so we were able to put the first four tiles on the back wall too! We are beginning to get an idea how the shower will look on completion.

Our idea with this bathroom was to use as much upcycled and recycled material as possible; hence our 90s theme. However, the more we complete the more we love what we’re doing and the harder it is to go along with our initial plan for bathroom fittings and tiles.

As you know, the floor tiles were broken second-hand tiles. The shower wall tiles were left-overs from tiling the north container bathroom. The other second hand tiles we have (that we can also use in other sections of the house) don’t match the tiles we have used so far, very well. So, we are stuck in a bit of a conundrum. It looks like we’ll have to buy some more tiles in order to finish the bathroom; something that will match the tiling on the shower floor and the shower walls.

But what should we purchase?

We are going to have to put on our thinking caps. Watch this space.

4 thoughts on “Tiling The Shower Floor With Hexagonal Tiles”