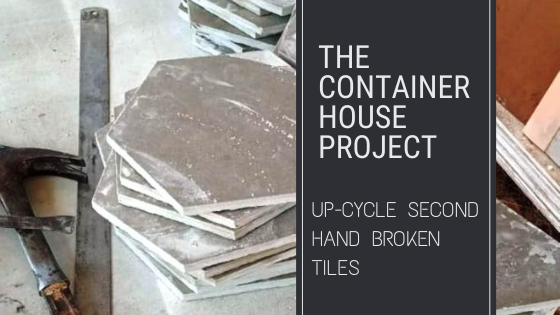 Not too long ago, Louis renovated a bathroom for one of Small Scale Engineering’s clients. The previous tiler used large, good quality ceramic tiles for this bathroom. Although all the tiles, but one, broke on removal, Louis brought the old tiles back home in the hopes that we might be able to use them on the Container House Project. How exactly would one up-cycle second hand broken tiles?

The good news is that although all the tiles broke, the pieces were still quite large. Therefore, we would be able to cut them all down into a smaller tile size.

We need something to tile the shower floor of our 90s inspired guest bathroom with its very un-90s resin floor. Kevin decided that these pain but textured grey tiles, would be perfect.

Kevin’s first thought was that squares and rectangles are too boring. He wanted something more interesting for our show-piece bathroom. He considered triangles. Equilateral triangles are a bit predictable. In order to use isosceles or scalene triangles, each triangle to be fitted to the shower floor would have to be measured and calculated individually, for best results. This is because a shower floor is concave in order to drain properly. In the end, Kevin decided to turn the broken tile pieces into hexagonal tiles.

Before Kevin started working on the tiles themselves, he marked out the pattern on a piece of packaging cardboard so he knew exactly what he would need. With this completed, he could get to work on the tiles.

The first step was to remove old tile cement off the back of the tiles. Only a few still had concrete stuck to it, so it was not too much of a problem. Kevin carefully chipped it off using a small sharp chisel and a hammer. He worked carefully in order to preserve the tiles as best he could without further damaging them.

With the decision with the shape made, it was a simple process for him to set up the electric tile saw with a jig to measure out the correct angle required to cut the broken pieces into hexagons. It took Kevin most of a day to cut enough hexagons for us to finish the shower floor. After that, the plan is to spend some time beveling the top edges using a belt sander.

I think that Kevin did an excellent job. In my (humble) opinion, the tiles look like they were bought in this hexagonal shape. I do not think too many people would ever guess that the tiles were up-cycled from second-hand broken tiles.

Best of all; we have just enough to tile the shower floor, with exactly one tile spare. Let’s hope nothing goes wrong in the tiling process!

If you’re considering doing something similar to this, I should mention that the second-hand tiles we used are excellent quality A-grade tiles. These tiles have an embedded pattern on the top, rather than than a cheaper printed tile. (The tiles in the photos below are very dusty and are a more uniform colour than all the dust would lead you to believe.) The fact that the broken pieces were large also made this a project worth considering.

We would not have considered going to all this effort on cheaper tiles as it just would not be worth the effort. It was a very labour intensive process that did not result in a huge number of tiles.

But, please do come back because we’ll definitely be sharing with you on how the shower floor works out with these hexagonal up-cycled tiles.